With thanks to Mike at ComicsDC.

TFW you know there are more sandwiches than time.

Tim Carman knows sandwiches. Word. The man eats and eats and eats, drives and drives and eats some more so that the rest of us can eat more targetly. Still and all, his curated list – twenty-five sandwiches – is a whole lotta sandwiches. If a person were to dot the DC metro area map with Mr. Carman’s favorite sandwich joints, then connect the dots via drivable roadways, the route progresses in the shape of a hoagie. Twenty-five dots, twenty-five rendez vous with duo-bread destiny.

Let’s talk about the tomato sandwich

I am a tomato sandwich interloper. While that might automatically make me a rabid fan, I hide my late-to-the-game status with nonchalance. Of courrrse, it must be white bread. “I prefer Sunbeam.” See, no hard line for me. Prefer is the word. Just prefer, not a requirement. Duke’s mayo, too. Goes without saying for those to-the-tomato-sandwich-manor born. Shhh, do not shout Duke’s from the rooftop, lest you betray your newbieishness.

The tomato sandwich is an older food, but not that old since it is reliant on white bread, the kind that yields maximum puff from minimum wheat, landing it in early mid-century America. Right? Probably wrong. The Virginia Chronicle references it in 1911, although the bread must have been meatier and yeastier and all that good stuff. Yup, lots of people – anecdotal research here – prefer “good” bread and I can’t blame em. That tomato sandwich is a whole different animal. Worthy. Delicious. Different.

Life. Sandwiched Between Birth and Death.

Between adulthood and your finish.

Speaking/writing of marmalade I will never get to France and eat these sandwiches and checkcheckcheck them off a listlistlist. I am familiar with most of them. Does familiarity satisfy?

All so delicious. It is food after all, that weird stuff we put in our mouths to masticate, taste, eat, swallow, digest. Weird, wonderful, sensual, sustaining. Ah. Gah. Yes. Do you want to live forever? No, you do not. Nevertheless, life’s glories are limitless, unmeasurable, vibrating.

Not rushing off to France to eat, yet noting the range of my desire. Feeling more alive for it. Sandwich my desire between buttered bread please. Then take a luscious bite, chewchewchew noting the barbarianism, … of it and STRETCH OUT WITH ALIVENESS.

Pile On the Birthday Wishes 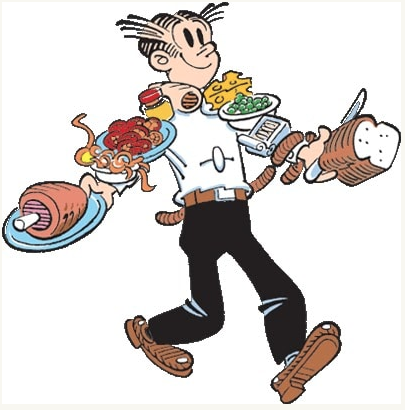 Happy birthday to ya and many happy returns! 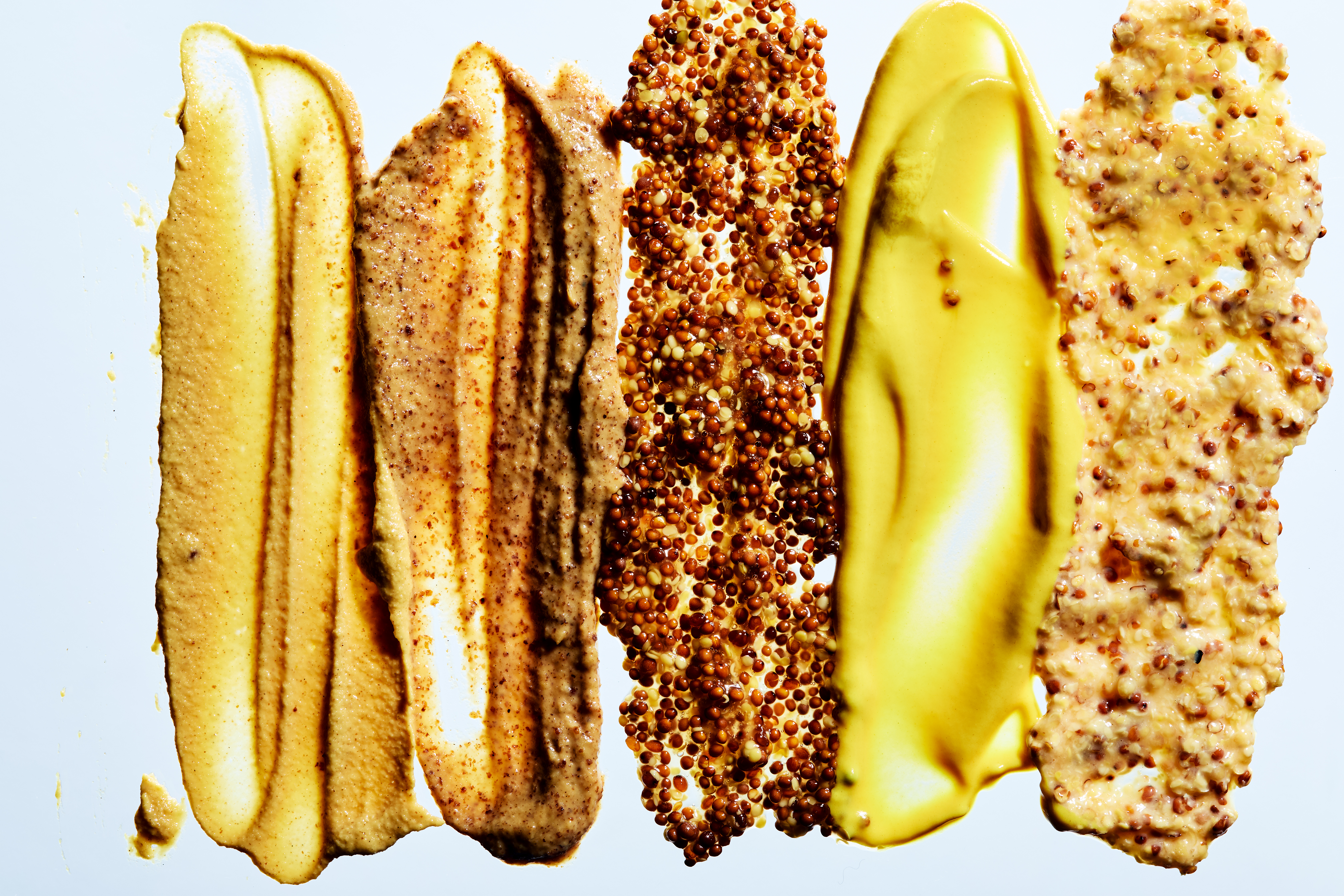 Plastering is an art, I am told, and I believe it. Plasterers are rare and their artworks are diminishing. Such a shame.

Mustard is alive and well and has become an art as well. Did you know that we are breeding sommeliers of mustard?

Yes, everything. Read about it here. When a school for braunschweigiers opens, I’m in. 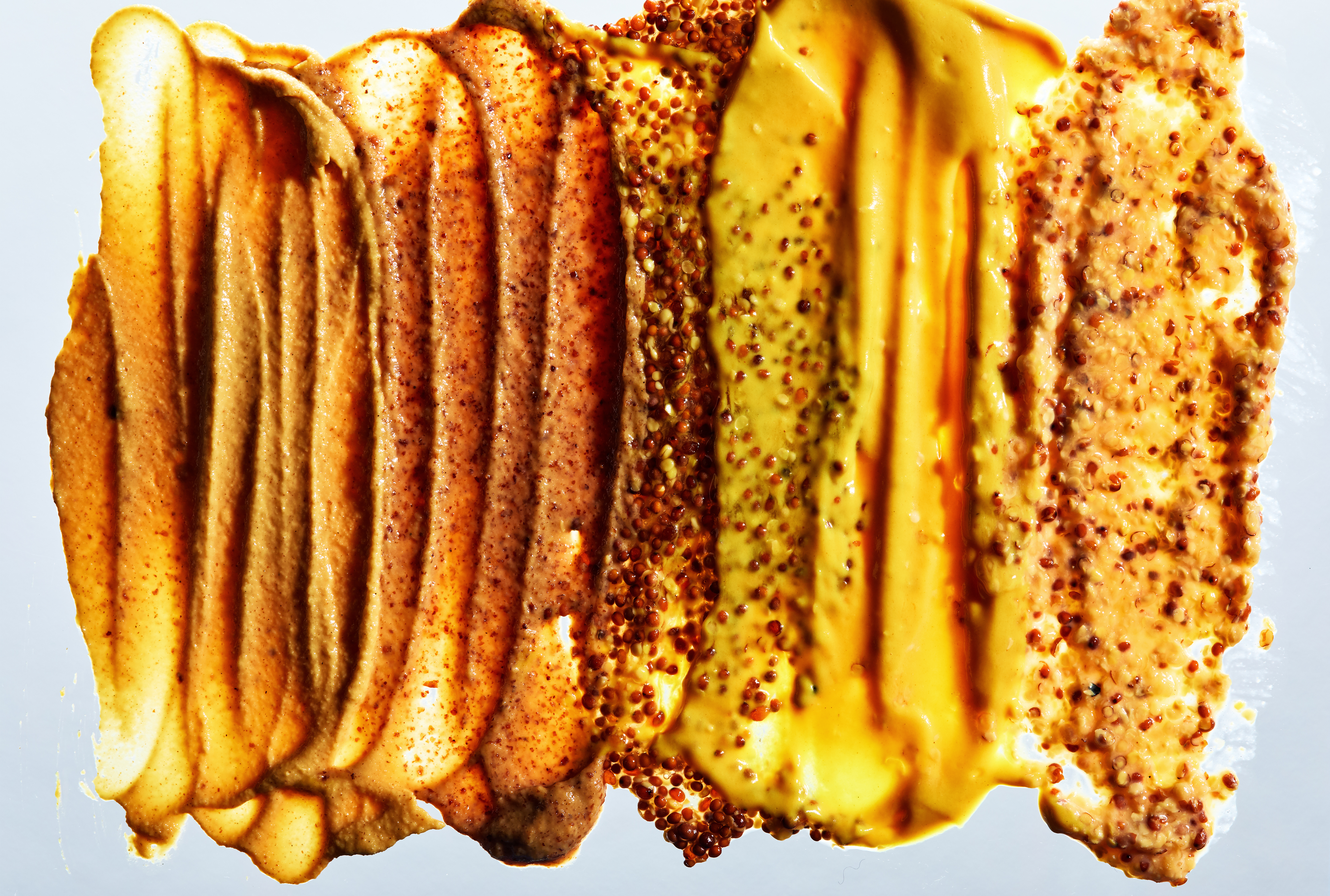 If You Give a Girl a Steak

She will want to steep some rosemary in olive oil. And is she makes a little rosemary oil, a charred lemon or two will follow. 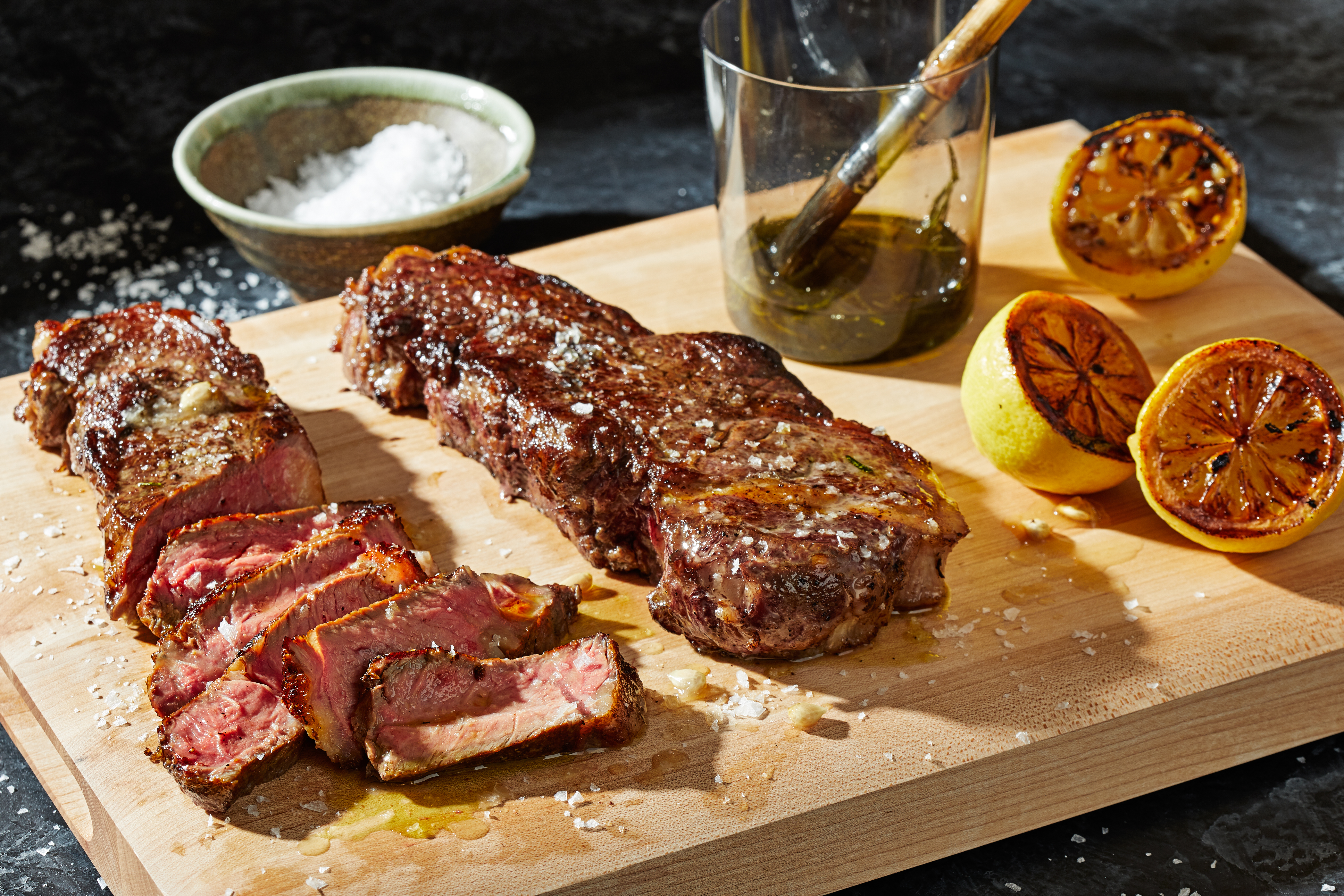 Photo by Tom McCorkle for the Washington Post (styling by moi!) 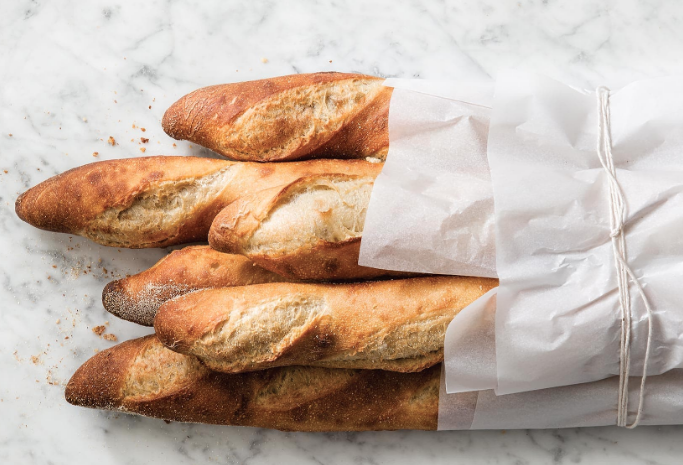 And on that bread, she will stack slices of steak, drizzles of rosemary oil, squirts of warm lemon juice and a shower of salt. Any girl with a good steak will want to make a sandwich. Indeed she will, any girl worth her weight in salt. Mais oui, sir! Mais oui!

Annnnd, as promised, the Slow Roasted Steak recipe from Becky Krystal at Voraciously. This preparation is a wonder.

Enjoy Every Sandwich. On National Grilled Cheese Sandwich Day and Every Day.

The day I write a list of bests is the day the world turns so slowly we are given a thousand hours between sunrise and sunset. Bests, bests, bests. The best sandwich is the last sandwich eaten. So very many sandwiches, and more inking up the papers every minute.

Thank you, Look-Out-Tina-Brown-Amanda for linking me to the non-inking pages of  Food and Wine’s Best Sandwiches in the U.S.  Thank mana they did not stretch their greasy hands worldwide. It would all just be too much.

Just around the corner from the the cozy digs of the Lunch Encounter, this Muff-A-Lotta from David Guas’ Bayou Bakery in Arlington, Virginia tops the list. Number one of twenty! Hooray for you, David, and your divine sandwich.

A barrage of familiars, astonishingly non-trendy, the list is a comforting collection of sandwich spots that have been known to deliver sybaritic sighs from those of who have not leapt off the carb wagon. I remain an attached rider, my knees hanging tight to bread, no thank you Jack Nicholson, j’adore un sandwich.

Wishing all a notable Grilled Cheese Sandwich Day, this year and all years. Take each bite with note.

Tagged Bayou Bakery, Best Sandwiches in the US, David Guas, Food and Wine

the best thing she ever ate. yet.

The Sandwich Hall of Fame, no less.

From the Food Channel Website:
We’re honoring the all-time favorite sandwiches in the Sandwich Hall of Fame because it’s all about the bread and what’s in between! If you’ve never had a BL”G”T, Eddie Jackson will tell you where to go. Fanny Slater hasn’t missed a week without her “Friday Special,” and Katie Lee heads to a small shop in New York to get the best Italian hoagie she’s ever eaten. And Southerners don’t have to travel to Philadelphia for the best cheesesteak, as Alton Brown reveals a hidden gem in Atlanta.

In six degress of Kevin-Bacon-Lettuce-and-Tomato-Land, Fanny Slater is the fine, fine sandwich eating niece to My-Main-Sandwich-Man-in-New-York, JAF. Kind enough to clue me in, MMSMINY, sent along the link to the Sandwich Hall of Fame episode featuring the MILBURN DELI. The MILBURN DELI. Shouting it: The MILBURN DELI. Thank you, JAF. I am righteously indebted.

Choosing favorites has never been a happy pastime for me. Do I hafta? No, I do not. Neither do you. So…remember that the Milburn blasts the New Jersey Joe into the universe of STELLAR SANDWICHES. (The Joe with, uh, meat, not tuna. Got it?)

Why there is not a Sandwich Joint Hall of Fame, I do not know. Perhaps because the Milburn is the Sea Biscuit of sandwich joints. No one can touch ’em. Period.

So, this is where we separate the true believers from the “can I have mine on toast with no mayo please.”

If you’re a religious reader of Lisa’s blog (that is, on your knees, begging for forgiveness), you’ve heard about the New Jersey Sloppy Joe before (all hail the Milburn Deli). Not a mess of ground beef and tomato sauce, but a triple-decker cold cut ‘wich. Best-man (twice!) James provided a long exegesis a ways back, but here I was this week and it was as good (and exactly he same) as my first, 45 years ago. How do they do that? Like this: 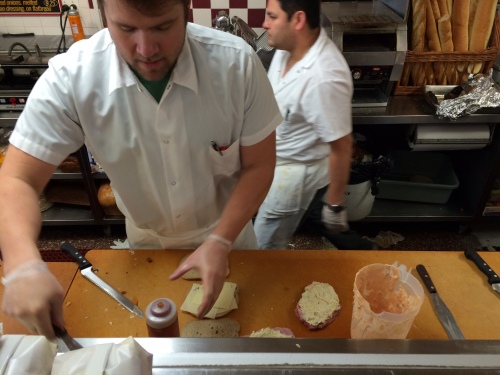 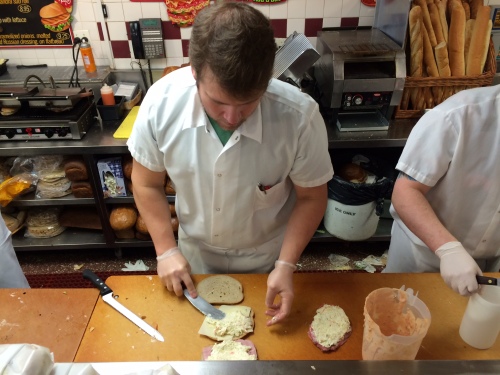 That’s 3 thin slices of rye (buttered), your choice of ham (mine), roast beef (James’), or turkey (WTF?). Swiss. Cole slaw. Russian dressing. To die for (I’m sure some have. Plus, often served when sitting shiva. Make a note for when I pass). Ta-da:

Rules for eating: left side first. Then the right. Save the wedge for last:

That first bite of the wedge is better than sex (first, last, ever).

I once had two Joes in one sitting. No problem. Looking forward to doing it again. Then dying.

Know what? What? I’m driving through Jersey on Saturday and I’m gonna stop for a Joe. Life is long and I need the calories.