Loosey, not goosey. Loosey porky. On the menu was pan haus. On the web is pannhaas, panhoss, ponhoss, and pannhas. Translated literally to pan rabbit. Rabbits are so cute and they do taste good in a pan (forgive me). Mush it is, mush fried till crisp. No one thinks mush is cute and no one likes the word, but mush it is and perhaps we can reframe it. Mush. Say it five times when you are hungry and it begins to tantalize.

A Pennsylvania Dutch dish, pan haus is a “whole animal” affair, very au courant, and while it is typically served on the plate, as is, I think it would be terrific in a sandwich. With raw onion. And crisp lettuce. On pumpernickle. Mais oui oui! Oink oink! 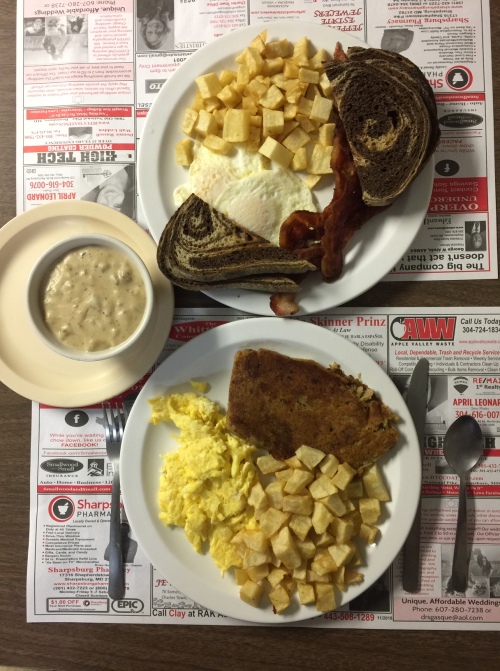 Fourth brown thing down is pan haus which, come to find out, is scrapple. I ordered it because I did not know what it was. With gladness did my heart leap when it arrived, brown, crispy and distinctly porky with that livery/offal edge.  The bf says it could have been more crispy and he was right. Minor detail and easily correctable though. Geez, it takes balls to put this stuff on a menu and I applaud you, Betty’s in Sheperdstown, WV, with my greasy mitts.

Not all agree that pan haus and scrapple are identical. The thing is, not all scrapples are identical, nor pan haus. They have yet to be corporatized, diminished into one formula. Variations proliferate. Hooray.

Betty’s seemed to have bread in it, in addition to corn meal and, frankly, very little actual pieces of meat, if any. The texture was soft, with no discernible corn meal crunch nor, according to the bf, a strong meat taste. I tasted liver and pork, although it was subtle. All for the best first thing in the a.m.

Recipes available online are limitless and they vary, as any decent dish does, according to the cook. Adding a splash of cider vinegar to the pork scraps while they simmer seems wise. Dashes of herbs and spices – savory, thyme, cloves, allspice – appeals.

In the words of Teri’s Kitchen To best describe scrapple, it is something like a meaty fried polenta, cornmeal to which seasonings and relatively lean cooked meat, usually pork, have been added. The cooked mixture is poured into loaf pans and refrigerated overnight to stiffen. Then it is sliced and fried in a little butter, oil or bacon grease. Scrapple recipes can vary greatly in ingredients, seasonings and methodology. In some versions, the tongue, liver and/or kidneys are used, just as they were in the original scrapple recipes, which were created to eliminate waste and use as much of the butchered animal as possible. Other recipes incorporate buckwheat or regular flour in addition to the cornmeal.

Betty’s, thank you for serving, sans irony or pretense or wide-eyed naivete, pan haus. Although, yours was so much more like rabbit in a pan than scrapple has ever been. Yours was unctuous and velvety, opulent in its frugality, subtle as is stewed rabbit.

And what does pan haus have to do with a sandwich, you ask. Well, some of the pumpernickel and pan haus, eggs and sausage gravy went home with me. Picture this, what a sandwich! Toasted bread hot mush salty gravy silken eggs. The stuff of which earthly, animally dreams are made.

New to me, pan haus, thankfully unseen previously on the webbity webb. Ribbity rabbity porky pan rabbit, right there to be discovered.