The Maid-Rite – Macomb and elsewhere 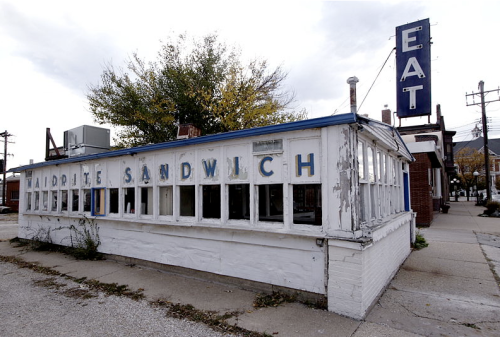 Photo by Robert Lawson
Serving “loose meat.” (Roseanne got the idea for this when she was married to Tom Arnold, who’s from Iowa), or “steamburger”, but the original Maid Rite, founded in Muscatine, Ioway. Basically, ground beef cooked in a secret solution. The only ingredient I knew was Pepsi-Cola.

The Maid Rite in my hometown of Aledo, IL served ’em up dry, or you could get them wet, which is where they’d get a big spoonful of the “secret solution” grease at the bottom of the cooker, and pour it over the sandwich.

Maid Rites were a dive restaurant up until about 15 years ago when they “gentrified” them into ersatz 50’s diners and doubled the price. The one in Aledo burned down before this could happen, thank God.

OMG, you’re right! I grew up in Macomb, Ill and we had a hole in the wall place that made them for ever. Name of restaurant? Made-rite. Menu? Maid-rite. I haven’t had one in years and here I am drooling, thinking about one. Damn. I have no idea what’s in ’em either. My mom took me there the day I opened my first bank account, when I was 8, and I remember it because of the sandwich. If you eat a sandwich and 38 years later you salivate thinking about it, that’s a good sandwich.
Kirbie

33 responses to “The Maid-Rite – Macomb and elsewhere”